In the Frame
Just Call Me Cat

Originally hailing from France, Cat Berruer is a Melbourne-based illustrator. Her work draws on vintage and retro-pop imagery, pin-up culture, and feminist topics for inspiration. Cat's personal brand of elegance, sass and humour come together to create fresh and playful illustrations that delight and empower her customers and fan-base. Cat's work often holds an uplifting and supportive message aimed at supporting diversity, inclusivity and individuality, and hopes her work will make a positive impact on social issues within the community.

I had not been to Japan since I was very young.  And all I can remember of that trip is my (at the time) very thick, very golden blonde hair made me very popular with the locals.  My memory plays this back to me as young me, a bright light in a sea of dark heads, the centre of attention.  My hair is, sadly, not what it was, and I imagine Japan has changed quite a bit in the ensuing 30+ year gap as well.

Our trip was split between our days in Yokohama, a port city south of Tokyo, where CP+ is held, and a couple of days in Tokyo itself.

The flight over from Melbourne is a little over 10 hours, but the time difference is actually only 2 hours, so there's really not much of a worry with jet lag...which is a big advantage for shorter trips like this one (long gone are the days I can swan off for 3 month hiking trips and really explore a country...).

Narita, Tokyo's enormous airport, is a well oiled machine, contrasting starkly with the third world horror of inefficiency that is Tullamarine (and I happen to read as I write that Sydney airport is currently about 6 hours backed up thanks to another unspecified 'systems' snafu).

Transport to and from the airport is fast and easy to arrange - the train literally leaving on time to the second.  Japan just seems to get on and build things.  (It certainly makes one mindful that for all of the nearly twenty years I have called Melbourne my home, they've been endlessly discussing, but not actually doing, much of anything.  There's still no train to the airport, crossing the city remains a painful disaster, and right now half the recycling bins in the city aren't being picked up because we apparently imagine China will fix all our problems).

The trip to Yokohama from Narita is an extra hour by shuttle bus.

Japan is clearly a country that takes great pride in everything it does and one where respect for others runs through every interaction.  The streets are spotless, and everyone is constantly mindful of others - nobody has loud conversations on public transport, everyone stands to the left on escalators, and shop staff treat you like you're royalty even if you're just buying a bottle of water.  You feel completely safe - at all times, even down small alleys, late at night, off the beaten track.  Alex Cearns posted this video to Facebook after the trip - and it really is like this!  It's just a wonderfully pleasant place to be.

Japan is not cheap - generally food isn't so expensive (says the man who paid for exactly none of our delicious meals!) - but drinks are definitely expensive, as is shopping in general.  But the quality is also excellent in general.

It helps if you like fish.  There's a lot of it - and it's fabulous.  Very simple dishes, that exult in the main ingredients, but perfectly prepared and super clean on the palette.  Raw or cooked, it is always very sophisticated food - but without the fuss you get with European food.  Whether it was the delicate tempura, the succulent wagyu beef, or the endless exquisite sashimi and sushi (with self grated wasabi at the table - nothing like that green tube paste we suffer through here!)...it was all a complete delight.

Beer is at the dry malty end - the very hoppy beers in vogue in Australia can be found, but are not the norm.  Asahi is everywhere, served cold and crisp - and is a great match to the food!  Sake, had both cold and warm, is delicious and a lot more palatable than the local spirits of some other Asian countries (I'm looking at you Nepal, with your firewater rakshi!).  And Japanese whiskey is truly excellent - I only tried a couple but they're certainly on par with the best whiskeys I have drunk while living in the UK (although I did not come across anything peaty like Lagavulin etc, of which I remain a huge fan).

What you do notice is the distinct lack of fruit.  By the end of a week I was definitely hankering for more fresh food.  Even when I visited a supermarket, there was really only one row of fresh fruit and veg, and you don't buy e.g. a sack of oranges for a couple of dollars - you pay instead a small fortune for 3 individually wrapped oranges (and it's winter, i.e. citrus season there). 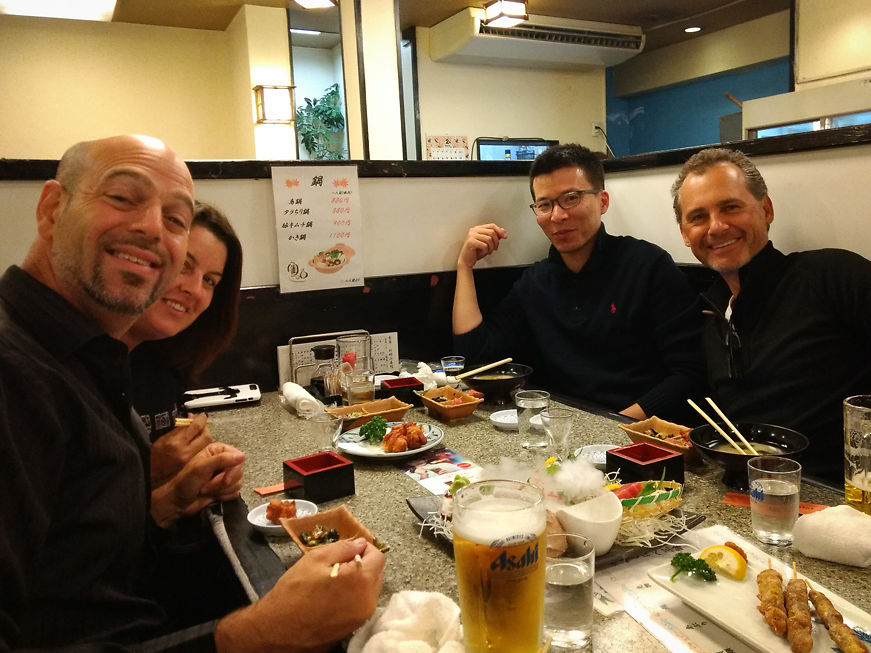 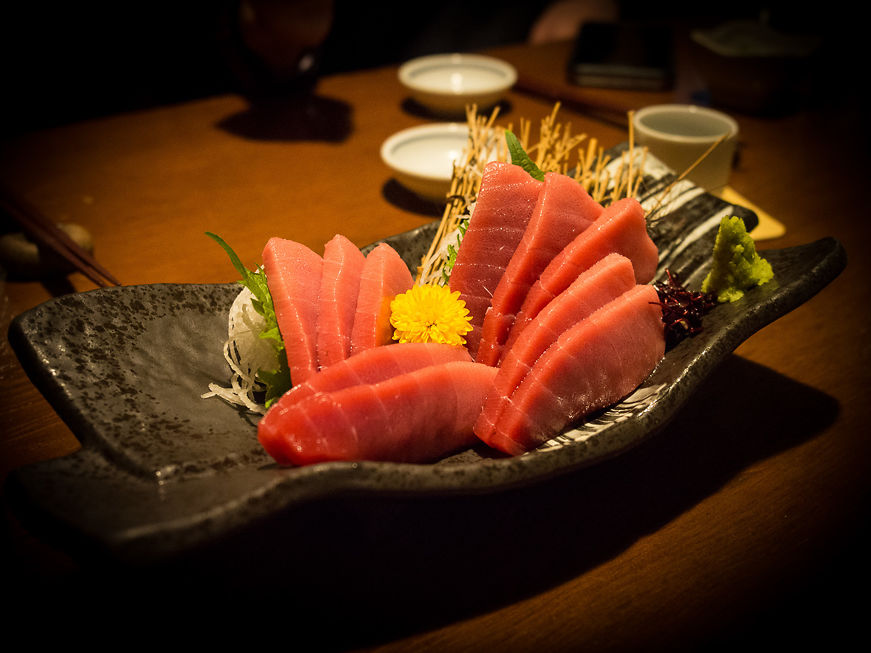 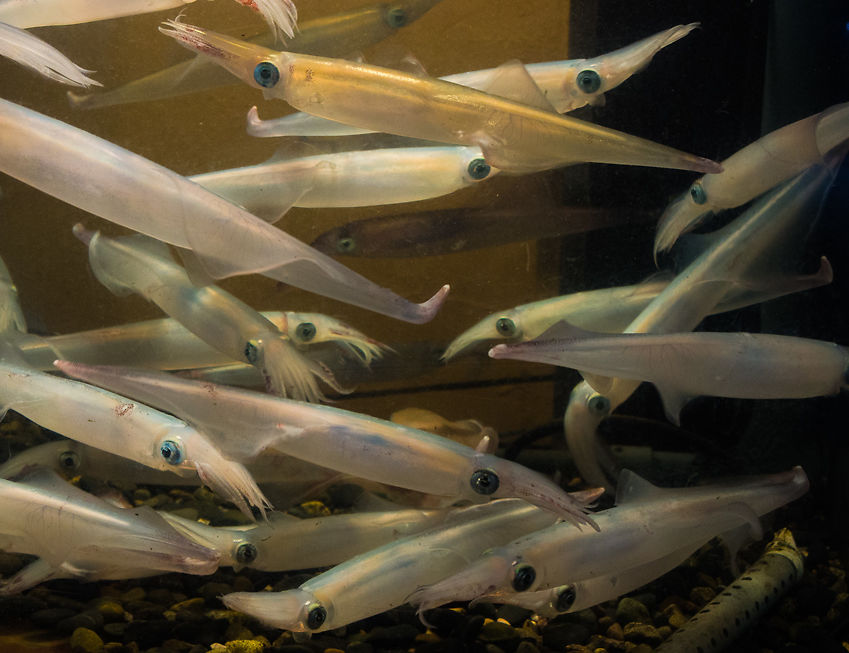 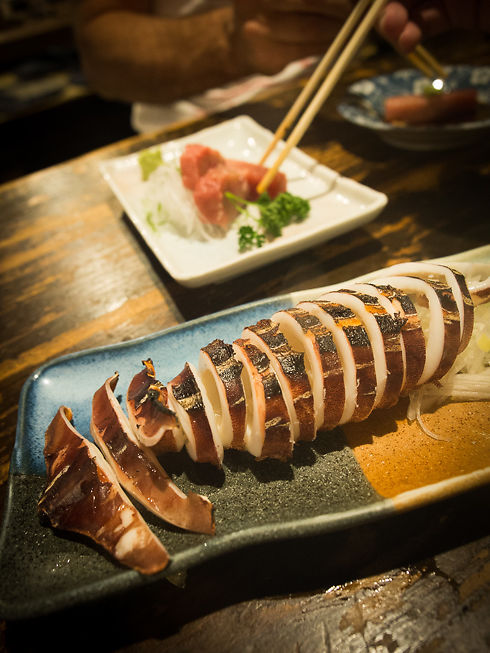 ...and the delicious result! 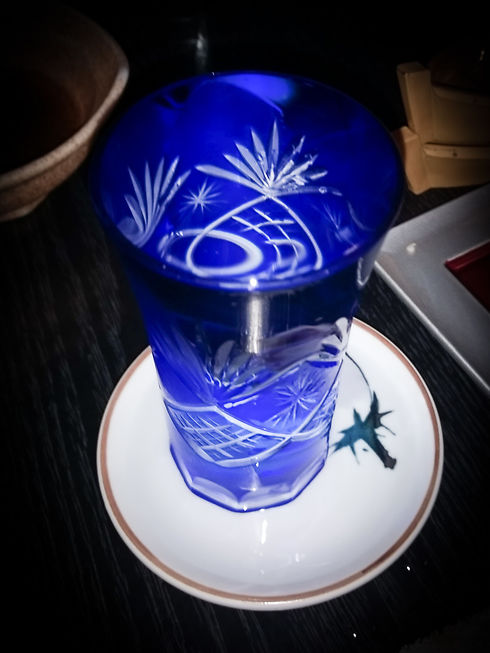 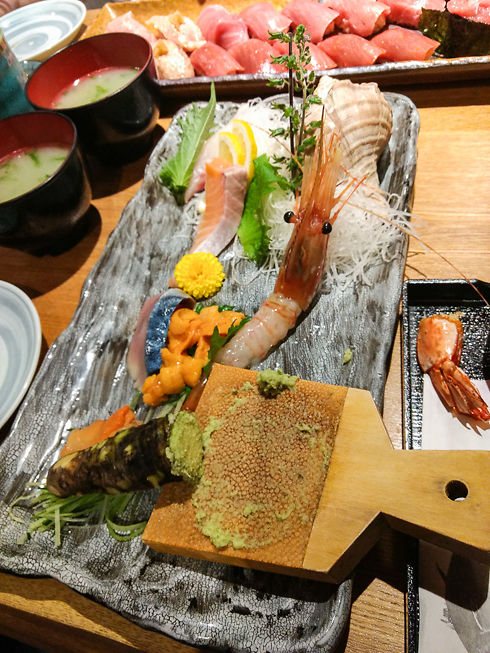 Freshly grate your own wasabi 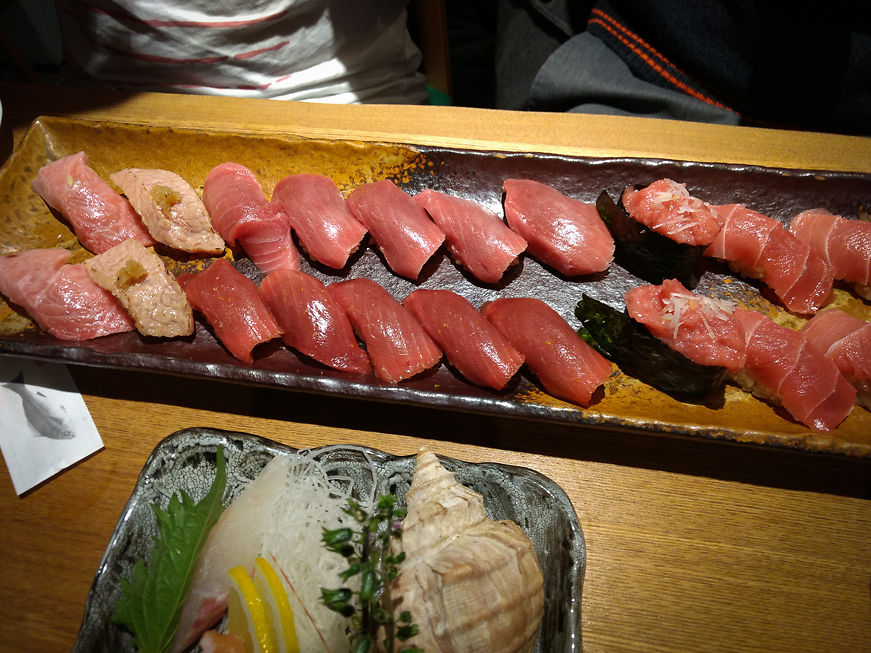 Literally the freshest & best sushi on the planet...

Indeed, it seems everything is individually wrapped and the use of plastic is everywhere, and rather excessive.  I was told Japan's recycling is excellent, but a lot of it has to end up in landfill inevitably I think.  We're talking down to the level of individually wrapped napkins - really just about everything.  Hygiene is probably a big part of that, and I'd say at least 10% of people wear white cotton masks in public in Japan as a matter of course from what I could see.  Apparently this started as far back as 1918 with the Spanish flu, but re-gained popularity around 2009 when other flus swept through, and seems to have stuck.  They are worn by both the sick, and those not wanting to get sick, but also even for fashion purposes now.  You get used to it quickly and very soon it seems normal.

We were mostly working during the days in Yokohama, but from what I saw of it, it is a very pleasant business town.  The hotel we stayed in (Sakuragicho Washington Hotel) was good - in Japan, hotel rooms are tiny, but very comfortable.

Yokohama is dominated by the large bay.  The bay view has a huge Ferris wheel and roller coaster in it, and along the bay between our hotel and the venue for CP+ was mostly upmarket shopping.  Actually, it's a pretty amazing shopping centre - scrupulously clean throughout, and whilst busy, it felt vastly less crowded than similar Australian centres, thanks to the ever polite Japanese and the efficient and helpful staff.   If I could fit any of the Japanese sizes, I'd have happily spent more time (and a lot more money!) here.

The best bit of Yokohama we experienced were the small backstreets behind the hotel - full of local restaurants, bars and venues.  Each street lined with a series of different matching archways, these streets had real character.

Tokyo is vast - it's honestly hard to get your head around just how big it is.  We went to the top of Sky Tree Tower in a lift that goes 600m/minute - that's roughly the speed of an Olympic sprinter!  From the top, you couldn't see the edge of the city in any direction.  It truly felt endless.  A relatively small amount of high rise, but most of it medium rise - as far as the eye can see. Greater Tokyo is counted as the world's largest contiguous urban area, with a staggering 38 million people.  Yokohama (almost 4 million people itself!) - is effectively a suburb at this point.  Tokyo is just one city in Japan - but with nearly twice Australia's entire population. And yet there seems to be much less honking, and impatience, and general aggravation evident - there's an undeniable and surprising sense of calm to the place despite the sheer volume of people.

February is the end of winter in Japan, and we were lucky to see the first inklings of Spring.  Indeed, the days were unseasonably warm, up to around twenty degrees - while the nights were indeed cold (and there was one brutally cold and windy night in particular - with the cold wind off the bay in Yokohama cutting right through all but the warmest of jackets).  The early blossom (at this stage plum blossom), is just beginning to appear on the precisely manicured trees dotted around the streets.  I didn't make it to a proper Japanese garden this trip, though, which was a shame but gives me a good excuse to go back another time!

We visited the famous Tsukiji Fish Market - unfortunately the wholesale market was closed, but the retail section was amazing enough, and the restaurants in this area are famous for having the best and freshest fish (you can expect quite a wait to get in).  It was the life and colour of the place that was most interesting to me - from the dazzling array of seafood, to the endless dried goods, and cooking paraphernalia and pottery and knife stalls.  Fascinating sights everywhere!   Chefs carving the cheeks from heads of tuna, even a taxidermied panda (not sure what that was about!).

We also took in a Tokyo temple - Sensō-ji.  This is an ancient Buddhist temple, impressive in scale and surrounded by blossom lined streets of vendors.  I'm told this temple is the most visited spiritual site in the world - over 30 million people visit in a year.  Despite the crowds it was well worth the visit, as were the surrounding streets full of restaurants and vendors. 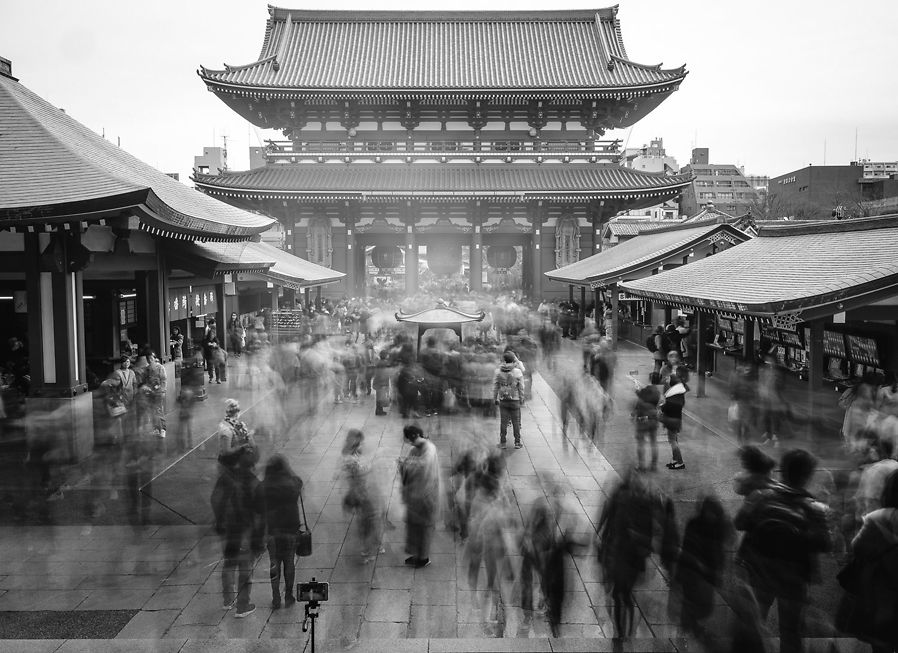 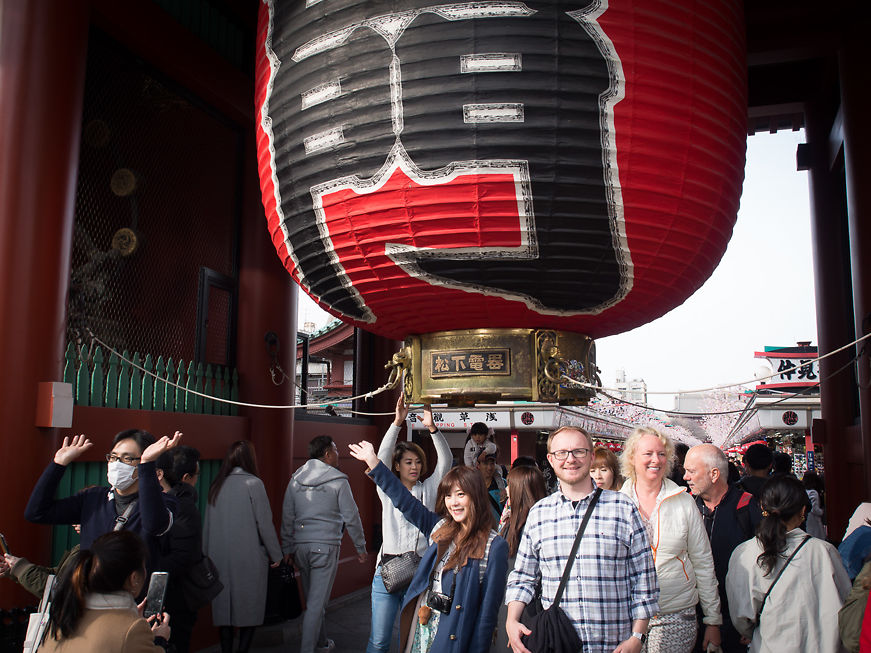 Jeremy Daalder at the Thunder Gate, entrance to Sensō-ji 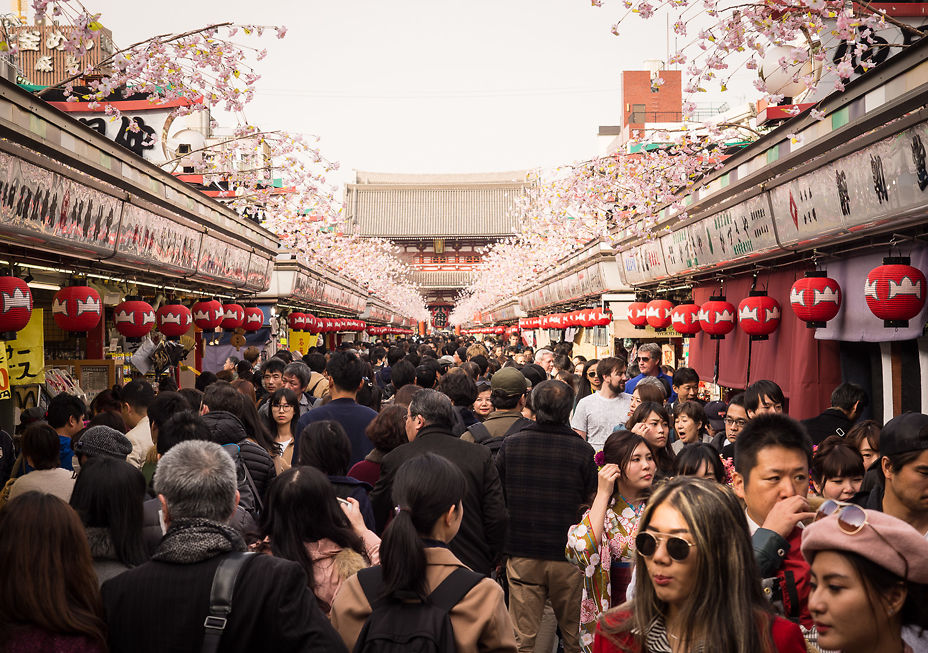 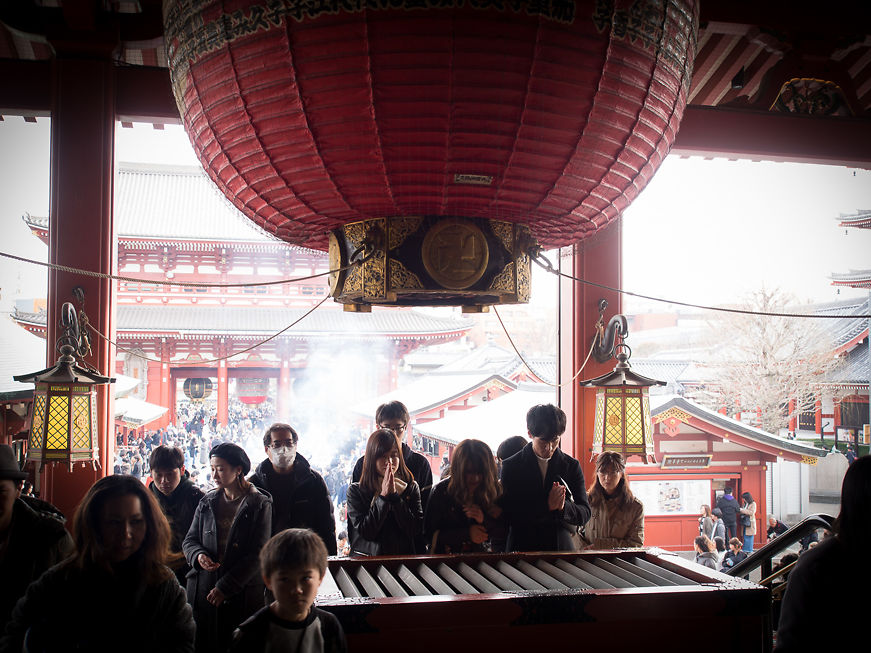 Looking from inside to out, prayers at Sensō-ji 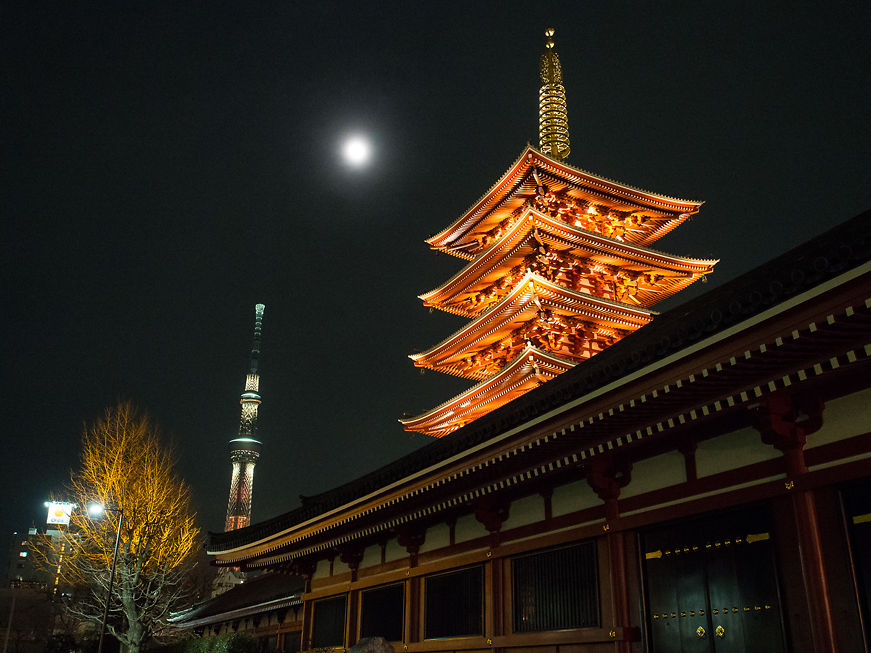 Shinto shrine at Sensō-ji, at night

With our BenQ guides, in the evenings we ventured away from the hotelly/touristy areas and into proper, local-filled back-streets.  This meant fantastic and authentic, no English speaking restaurants surrounded by Japanese enjoying their own free time.  Sitting with legs tucked under tables, in cosy and sometimes ancient surrounds, is very pleasurable (the only downside it that people still smoke extensively in restaurants in Japan which just seems anachronistic at this point to me!).

Add to the lovely surrounds new friends from the industry, and you've got a recipe for what was a very successful and highly enjoyable trip - that only touched the surface of what Japan has to offer of course.  There's no question it will be high on my list of places to go back to!

Once again a huge thank you to BenQ for making all this education and enjoyment possible.  We're really very lucky to have the great folks from BenQ in Australia so generously supporting the photo and art industries (and stay tuned as we have a number of further sponsorships and so forth to announce throughout the year!). 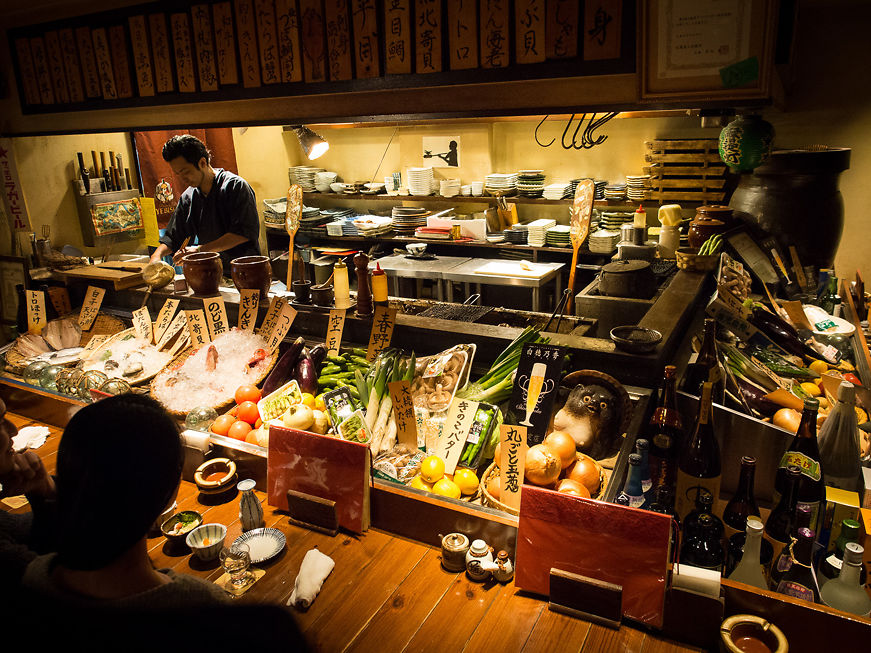 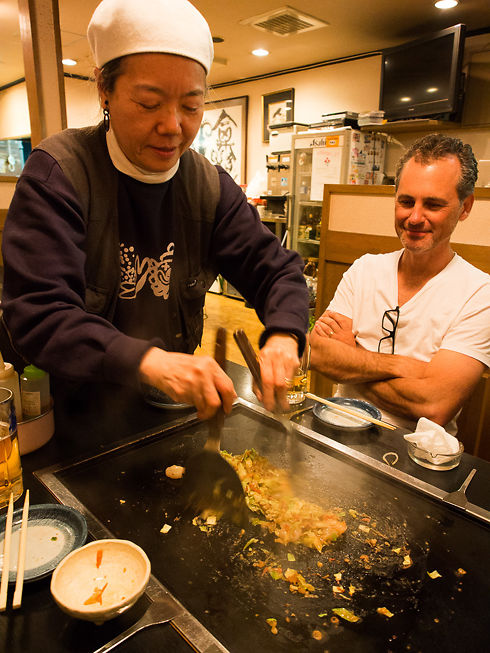 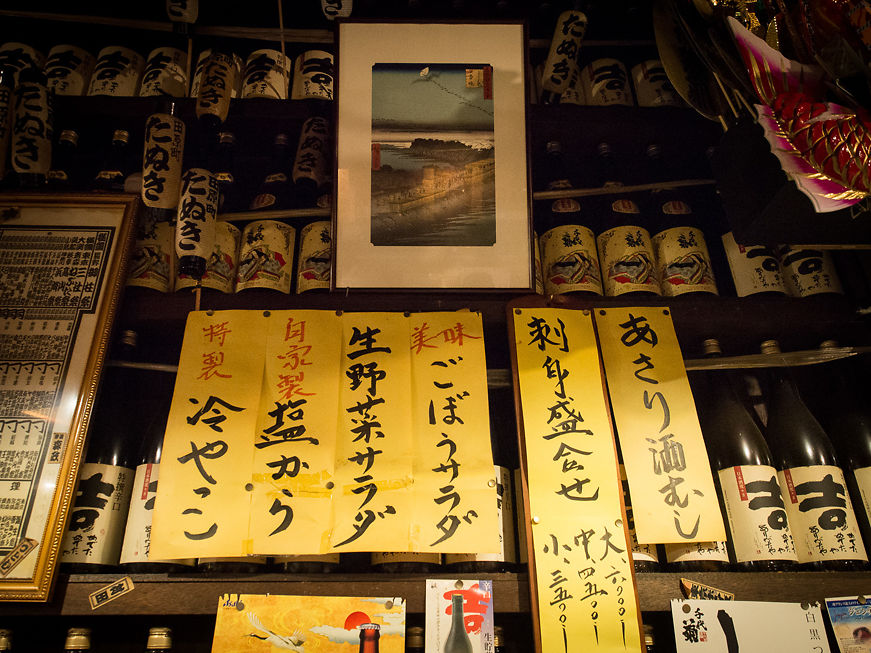 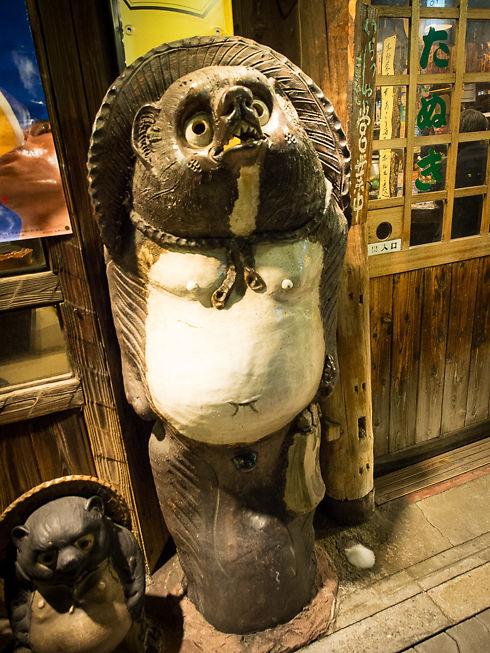 A Tanuki welcomes you to the restaurant 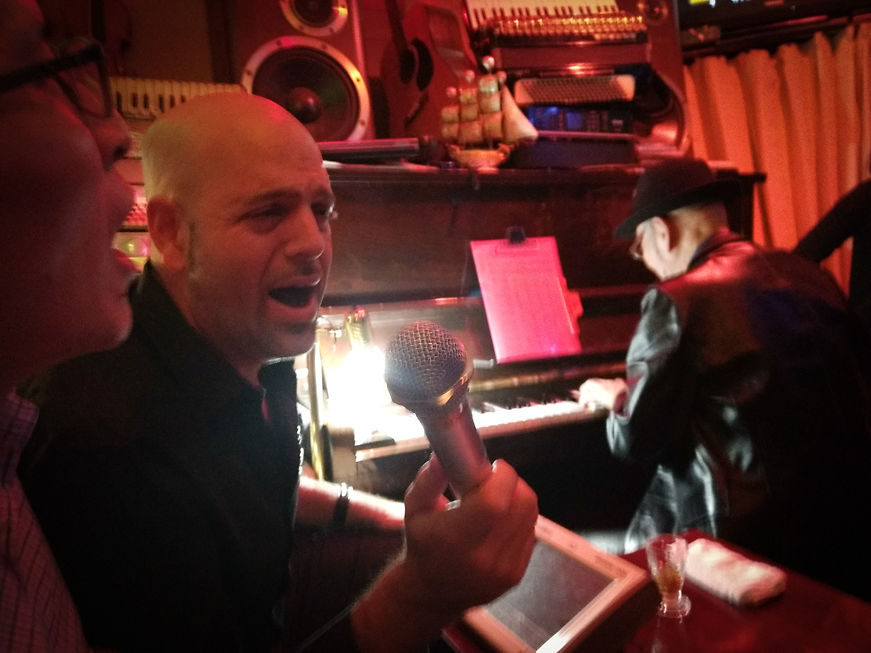 Everything a trip to Japan should be...

Please see the other two parts of our Japan trip coverage:

I have also made two complete galleries that show more than the images here.  The best way to use these is to click the slideshow button in the top right corner and you'll get captions as you go: 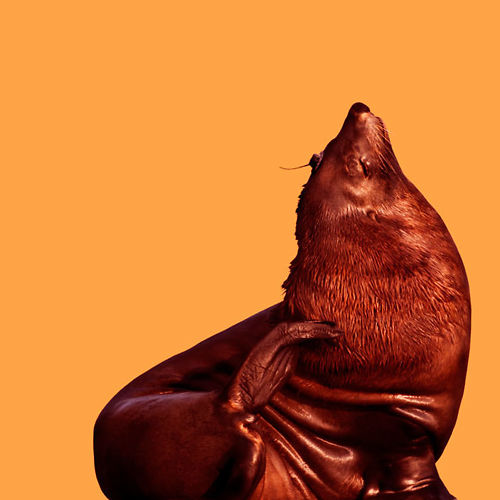 Just wanted to say the prints for the 'Art of the Underground' exhibition printed last week look sensational!