Contemporary Surrealist painter Simon Swingler has spent 25 years honing his craft as a designer, channelling his artistic proclivities into illustration and graphic brand identities and putting aside his childhood desire to create something a little less well-pruned.

The creative director of design studio Diameter embarked on developing his art practise as a painter in 2016, trading in the mathematical precision of vector design for his wonderfully weird brand of wacky satiric surrealism. Simon's signature style draws influence from the comic irreverence of MAD magazine and the surreal dreamscapes of Dali, and explores the myriad idiosyncrasies and perplexing strangeness of human nature.

Simon's latest project is Art Worth Saving, an art initiative supporting endangered wildlife by donating a portion of sales to organisations working to conserve and create safe habitats for vulnerable Australian species.

Also, don't miss the upcoming Art Worth Saving exhibition launch which will feature a fabulous collective of Melbourne artists also passionate about the cause.  Come to the opening night at No Vacancy Gallery on August 18th to mingle with some cool folks, enjoy a cheeky drink and take in some art!

Tell us a bit about your creative practice up until this point. What motivated your decision to put more focus on making art outside of your work as a designer and creative director?

I was kicked out of year 9 French language class for hiding up the back and listening to music with my friends. An academic misfit, I was banished to the art class, and in art I found myself. A career as an artist wasn’t a choice I felt I could entertain as a youngster, so becoming a designer was the next best thing. The itch to create art has been with me throughout my years of professional practice, so illustration has been an enjoyable creative cousin that has sustained me. A few years back I decided that I’d postponed fine art and painting in particular for long enough, that itch needed scratching…furiously. 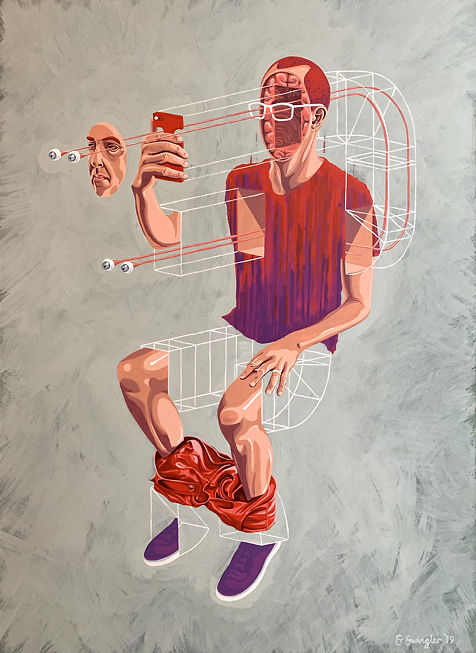 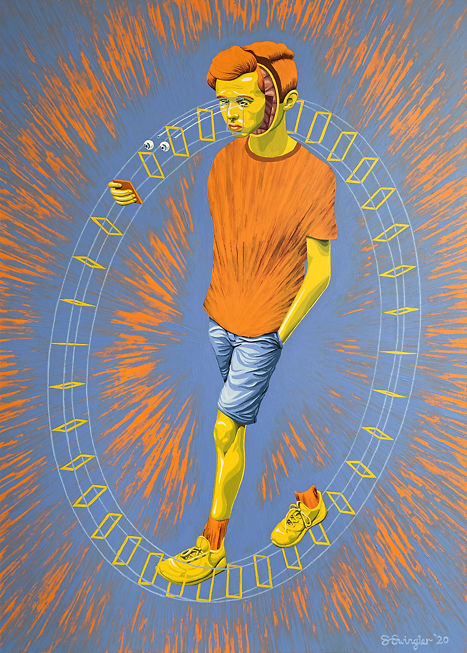 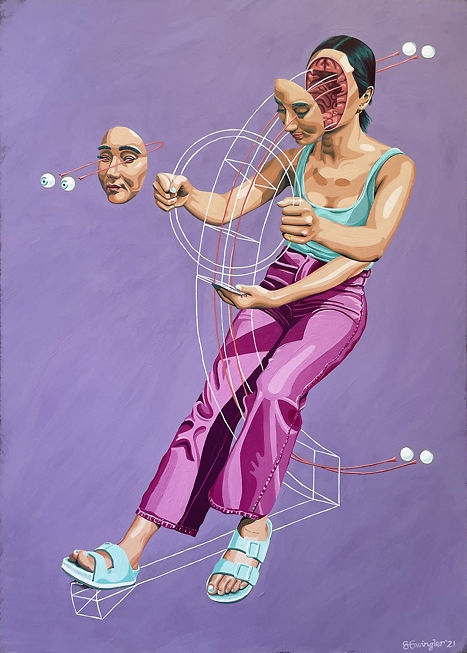 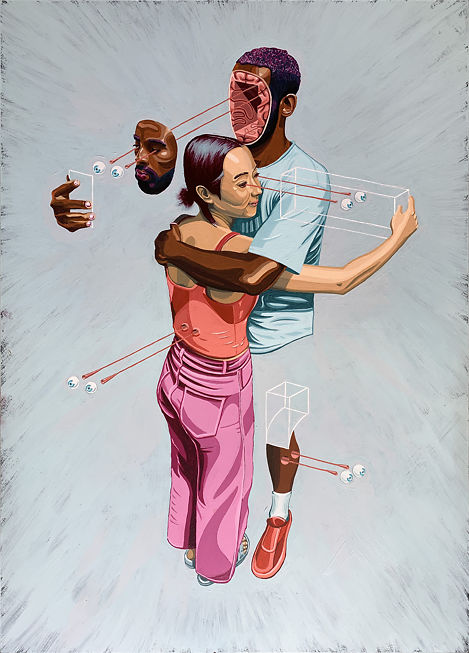 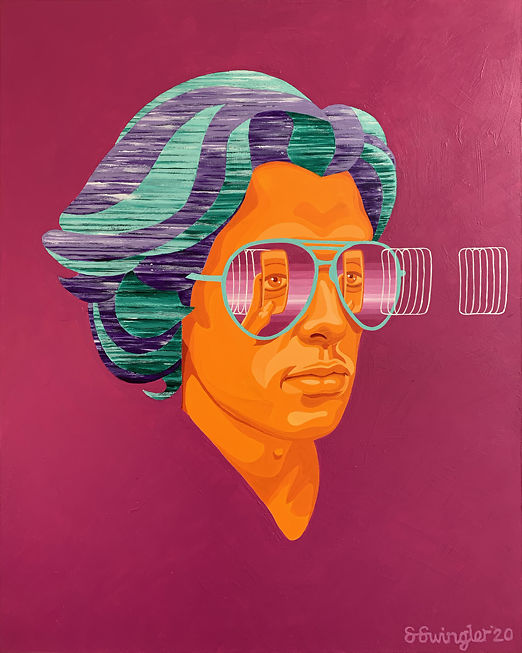 Modern technology, with its powerful grip on our attention, has led us to almost behave as if captured in a surrealist void, ignoring the actual world that sustains us. Creating large pictures using traditional paint media without the benefit of ‘Control Z’ seems like an appropriate response to this digital tunnel vision.

A recent show at St Heliers St Gallery was your latest project Art Worth Saving, an art initiative which aims to contribute to the preservation of native endangered species and their habitats by donating a percentage of print sales. Can you tell us more about this endeavor and how it came into being?

The outrageous display that the natural world treats us to is under threat of serious degradation and worse due to humanity’s actions. Art can powerfully highlight life’s beauty, so creating an initiative that helps shake us out of our destructive stupor seems an obvious thing to do. Though a coincidence, I began developing Art Worth Saving around the time that the federal government classified the koala as an endangered species, an event that galvanized my determination to give it a go.

Art Worth Saving has two main purposes; to sell beautiful fine art prints of endangered and vulnerable Australian species and donate 10% of sales proceeds to conservation organisations Bush Heritage Australia and the Tasmanian Land Conservancy; and support local artists by giving them a further platform for their work and receiving income from the sale of their work.

Your unique brand of contemporary surrealism tackles the idiosyncrasies and often bewildering strangeness of human nature, exploring a myriad of topics such as greed, revenge, and disassociation. What draws you to paint about these themes? Was there a particular moment or experience that led you in this direction?

Why do people do what they do? A psychologist could give you explanations, as could a Taoist, a philosopher, or pretty much anyone who’s devoted their curiosity to unravelling the mystery of human nature. The true answers escape us all. Finding some explanation for how we tick is more an imperative than a curiosity, painting these themes may be my way of figuring the mysteries out.

Your last painting series Smart?phone explored the bizarre ways in which technology has impacted human behavior. Can we expect to see you expand more on this series in the near future, or will you beat a path into new territory?

Surrealism’s visualization of dreamlike other-worlds has long appealed to me. Modern technology, with its powerful grip on our attention, has led us to almost behave as if captured in a surrealist void, ignoring the actual world that sustains us. Creating large pictures using traditional paint media without the benefit of ‘Control Z’ seems like an appropriate response to this digital tunnel vision. More like these? Sure… after I’ve checked my Instagram likes.

You’ve mentioned before that your art draws influence from your lengthy career as a designer and illustrator. Are there any specific artists, films, time periods or designers that have influenced your offbeat contemporary surrealist style?

Comics like MAD magazine were well-thumbed in my household; had I been a decade younger I’d have been an Ed Roth and Robert Crumb devotee. More recently, how could any Gen-Xer not snigger with delight at Reg Mombassa’s subversive middle finger to piously-held icons. It is probably no surprise either that discovering Salvador Dali’s work awoke me to art beyond the staid realism so prevalent in my upbringing. 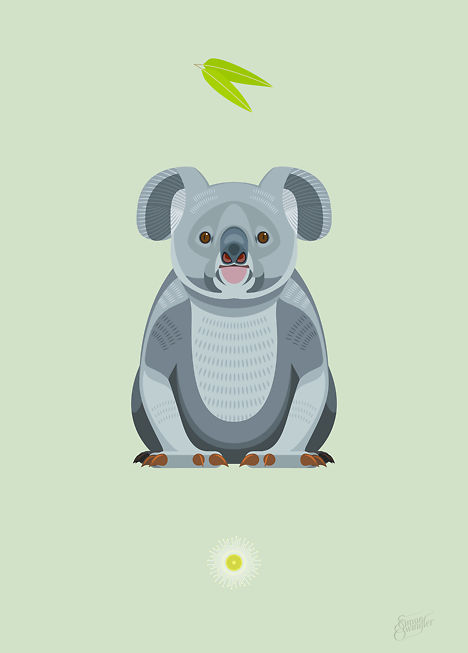 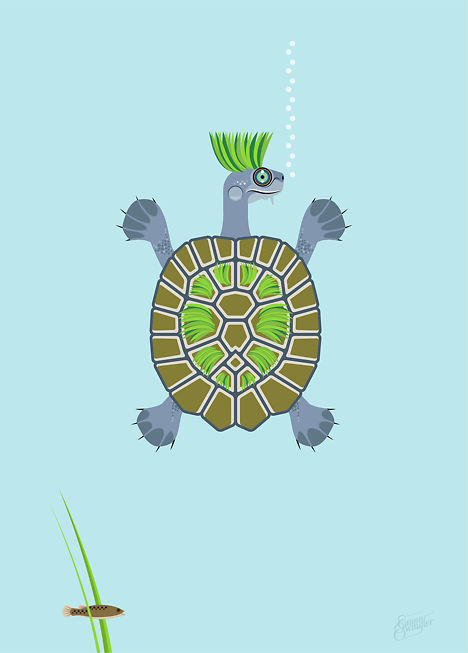 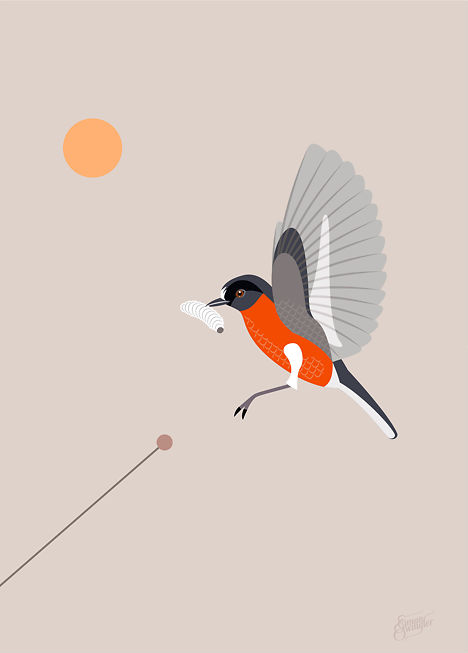 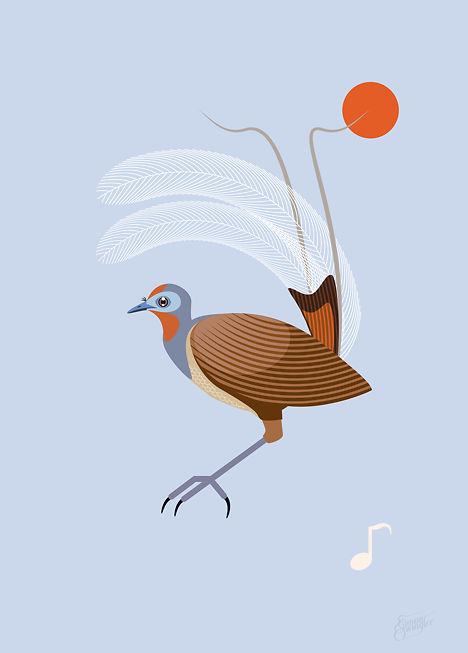 As a creative director of a thriving design studio, part-time artist and illustrator, I’m curious how you structure your creative practice. How do you balance your time between the design studio and painting?

Ever seen those performers who spin plates on sticks and attempt to prevent them from breaking? It’s like that. A career in professional design practise is great for determining priorities and meeting clients’ expectations, so a fluid ‘to do’ list is a must, as is approaching every challenge one step at a time. Painting, by necessity, comes second to business at the moment, mostly an evening pursuit.

With a such a prolific and diverse art practice such as yours, are there any new creative avenues you’d like to pursue one day?

No new avenues, I’ve dabbled enough. I’ve been painting part-time for six years now, so deepening my practice would be a satisfying goal. Painting is as much a meditative process as it is a creative one. There’s a peace in concentrating on every stroke, mixing colours, deciding which element to tackle next.

It’s been a strange few years indeed, with many artists and designers finding new and surprising ways to thrive during the lockdowns. Did covid prompt any personal epiphanies in regards to your creative practise?

Art Worth Saving has been my response to COVID. My design business suffered as a result of the lockdowns and like long COVID, has been slow to rebuild, so finding a path that offers some self-determination and income seemed like a good move. The added benefit of creating Art Worth Saving is that I’ve learned new online technical skills and commerce knowledge which obviously help in staying relevant in business.

How do you hope to see your art practise evolve over the next few years?

I’m hoping to attract representation by a reputable art gallery. As all emerging artists know well, finding and building an audience for our work is quite the unforgiving grind, so having someone helping in promoting my work would be a welcome relief, and certainly provide the confidence to dedicate more time to my practise. An achievable development would be working larger and in greater detail.

What’s next for the rest of 2022 - are there any new projects or exhibitions in the works?

Art Worth Saving has been developed in part to support artists who all share a passion for Australian species conservation. We have an official launch exhibition coming up at No Vacancy gallery in Melbourne’s CBD that will feature works by fabulous local artists David Booth aka Ghostpatrol, Lucy Hardie, Cat Rabbit, Luke Tieri, Carla McRae, Andrea Innocent, Eirian Chapman and Rick Matear. Everyone is welcome to attend the opening night.

WOW..Just wanted to say THE PRINTS ARE SECOND TO NONE.
Your work is jaw dropping.. I LOVE it..
HUGE Big Fat Thank You..
Happy customer..