Fresh off the back of his successful exhibition Iran - of land, sea and ritual, Queensland native Dominic Xavier's photographic works are a result of his inherent passion for travel, storytelling and ultimately a desire to foster a more empathetic global community.

An almost accidental by-product of his need to enact social change and his own personal development, his latest project seeks to challenge Western prejudice of the Middle East. A thought-provoking blend of editorial narrative and photojournalism, Dominic's Iran series is an intimate collection of moments that explores the diverse beauty of the Iranian landscape and the daily rituals of its people.

We are proud to have sponsored Dominic's latest exhibition Iran - of land, sea and ritual, and we very much look forward to seeing what Dominic has in store for us for his next project.

Read on to find out why Dominic exclusively shoots in analogue, which photographer has had the largest impact on his artistic practice and for a more in depth discussion of his latest work.

When and how was your interest in photography sparked?

My interest in photography started during my early years of high school. I had fallen into a circle of young boys who spent their weekends surfing by day, and moshing at hardcore gigs by night. One local band approached me to offer merchandise and admission in exchange for pictures of them on stage. Having my work validated at such a young age naturally gave me the confidence to get out of my comfort zone and continue to explore the medium, eventually guiding my decision to study it formally at university.

History tells the tale of a transition from homo sapiens to xenophobic creatures; dividing humanity into ‘us’ and ‘them,’ with an inherent fear of the unknown.

How has your photography style evolved over the years? Have you developed a particular creative process that you stick to, or is your approach fluid?

My university mentors always made light of my ‘lazy approach to shooting.’ At the time, I couldn’t understand their point of view. I felt I was engaged and giving 100%. However not until after putting the camera away for a two year hiatus, could I enter a reflective space to realize they were all not only correct, but almost surgical, in their evaluation. Since then I have reconciled with my flawed approach to my work, inherently leading me to focus more on the process rather than the outcome. Deciding to shoot only analogue since re-engaging with the medium is a nod towards the development of my own personal creative process.

What led you to shooting on medium format film? Was it an aesthetic choice or was it more about the process?

In what started as an aesthetic decision has undoubtedly become process driven. Discovering the Mamiya 7’s ability to technically present the world as succinctly as possible initially guided my decision, however further exploring my personal ties to photography has made it imperative to my process. This process has become a way for me to reckon my own insecurities and curiosities about the world.

The images in your upcoming exhibition “Iran – of land, sea and ritual” are quiet meditations of seemingly banal roadside or agrarian locations. What drew you to shoot this these particular types of scenes? Is there a narrative or a story you are trying to tell through these images?

History tells the tale of a transition from homo sapiens to xenophobic creatures; dividing humanity into ‘us’ and ‘them,’ with an inherent fear of the unknown. As I strongly believe personal acquaintance has long been the solvent of traditional prejudices, I arrived in Iran with the intent of challenging our western preconceived notions of the Middle East by showcasing not only the innate visual beauty of the land and it’s inhabitants, but moreover the existence of these themes in their day-to-day rituals. By unearthing these realities and presenting them to our western audience, it’s as if to say ‘f**k you’ to the tyrants of the region in which these exact notions are reported upon. Our western audience shall not be intimidated.

You have chosen Israel and Berlin as subjects for previous photographic projects. Why did you choose Iran as a location for your current series?

The idea spawned at a time where I felt personal development within myself taking a new direction. Certain political perspectives continuously reared their heads, and in fear of making my undoubtedly privileged existence redundant, I knew I needed to attempt to enact social change. Having continuously heard from the Iranian diaspora in Berlin of the plight of Iran’s inhabitants against both their own government, and the Western led sanctions, I became increasingly curious in deciphering my own preconceptions on the matter. Acknowledging my shrewd intent at diplomacy, I approached the discourse with vigour in a way in which I only knew how - a departure date with a backpack full of film and a notebook.

What has been the highest point in your career as a photographer to date and why?

To say I've had much of a career in this medium would be somewhat conceited. As much as the idea of having my work validated in such a way excites me, I'm currently solely focused on presenting this series to the wider public. With months of planning and hard work now behind me, along with the help and rigour of Image Science, Melbourne based designer Yarron Frauenfelder, and close friends and family, I'm feeling nothing other than grateful to have this project come to light.

How have you found working with Image Science with getting your work printed? What are the main reasons you would recommend our services to other photographers and illustrators?

As mentioned above, the rigour and professionalism exerted by the IS team is admirable. As a strong believer in collaboration, the whole is truly greater than the sum of its parts. Knowing the technical side of exhibiting can be taken care of, allows me to propel focus and scope towards my part of the process. 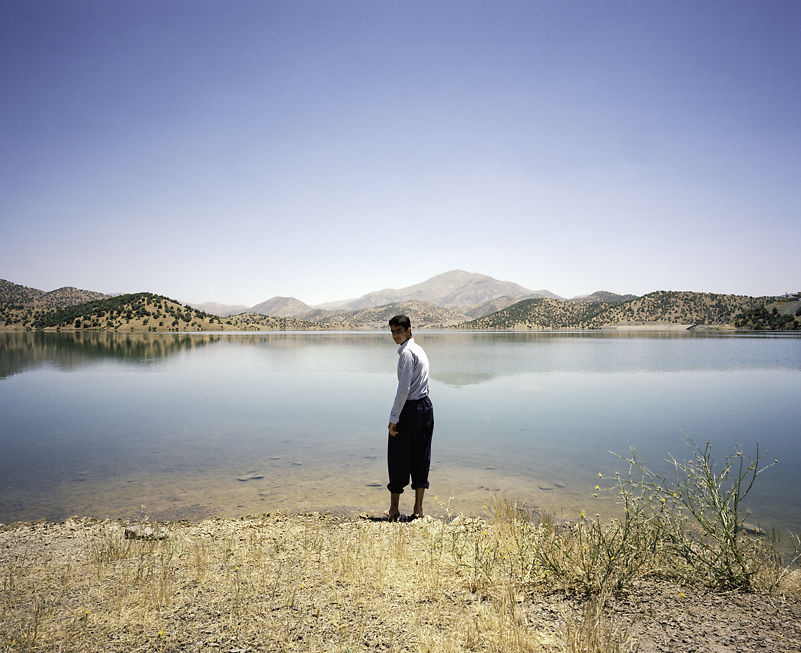 Hehza preparing to wash before prayer whilst visiting the Garan Dam near Marivan, on the border of Iraq, Kurdistan 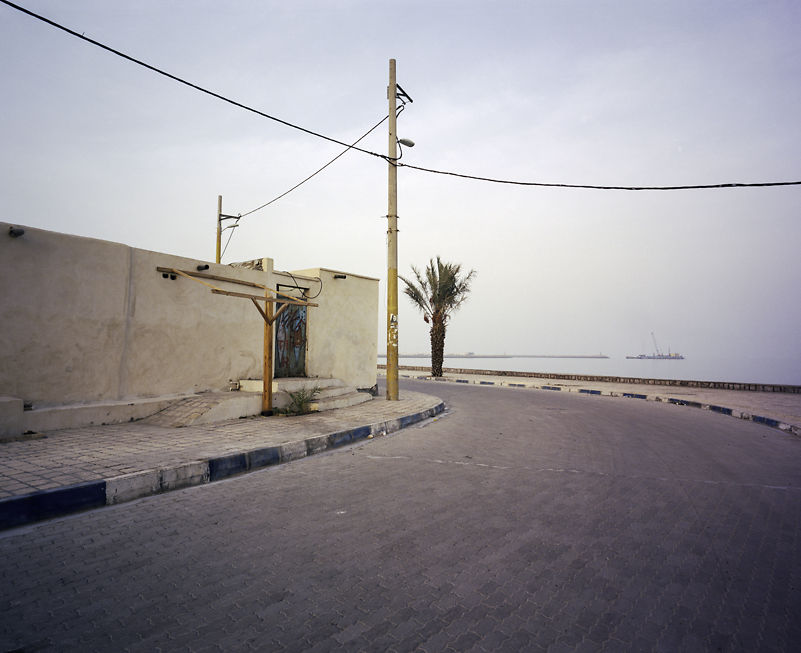 Caribbean tropical streets of the south in Bandar Abass. 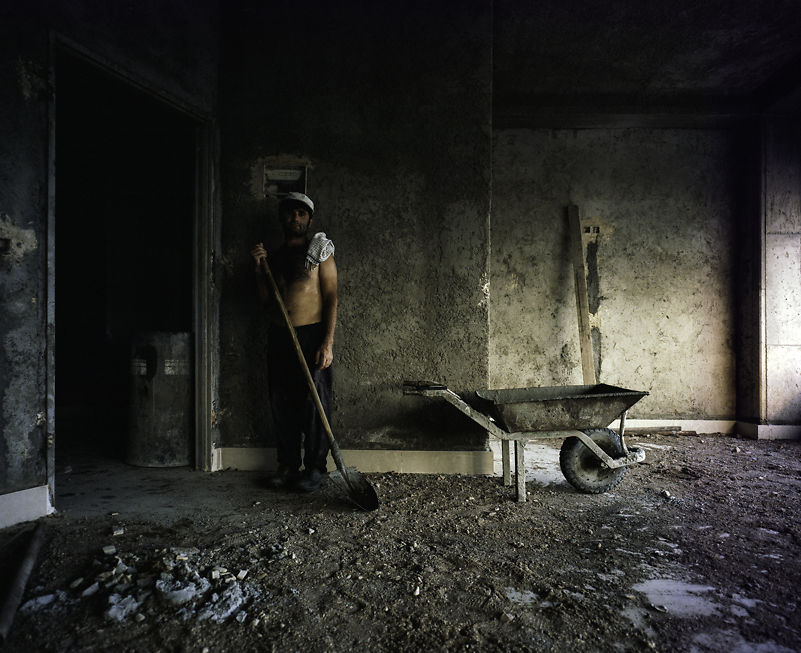 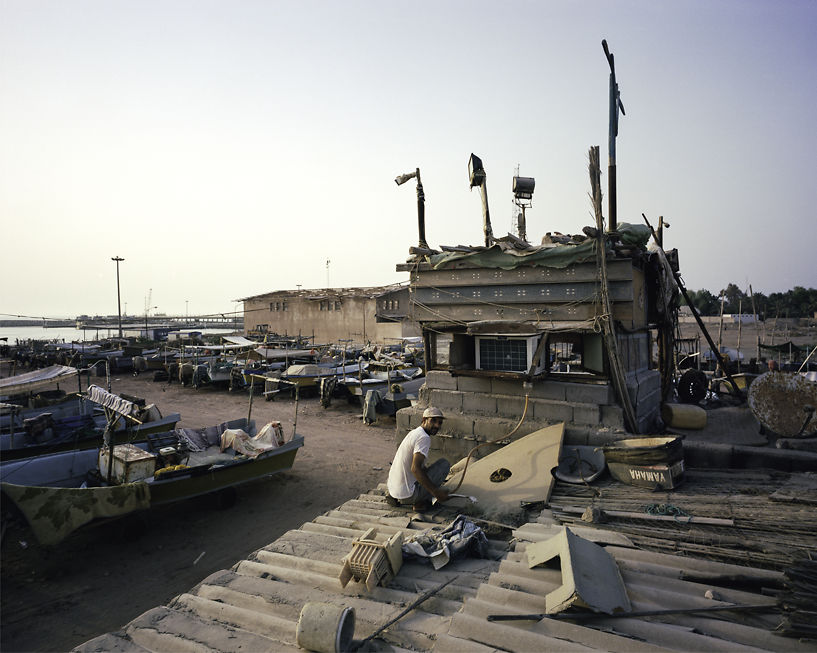 The boat yard manager toying with his aircon unit to his apartment, Hormuz.

Who or what have been your biggest creative influences?

From an artist perspective, the contemporary American photographer Mustafah Abdulaziz. Floating between conceptual photography and the documentary tradition, his ability to convey his altruistic tendencies throughout his work is both inspiring and compelling. Other influences tend to stem from anything foreign to that in which I already know, as I continue to focus my creative processes on perpetual evolution.

Apart from your Iran series, what else are you working on for rest of the year? Do you have any other exhibitions, talks or projects in the pipeline?

At this point there is nothing of concrete planned, however several avenues currently exist. From the continued exploration of my own relationship with the medium, to producing a more tangible account of my work within the industry, so long as I feel within myself inspired and engaged, will there be a sense of progress.

Interested in commissioning Dominic for a unique project or want to buy a print of one of his works?  You can head on over to Dominic's website at www.dominicxavier.com contact him by email on [email protected]  To follow Dominic on social media, add his account @_dominicxavier to keep up to date with his latest projects.

I wanted to say thank you for my amazing prints done by your team! I’ll definitely be back, as you did everything that was asked and produced an amazing product for myself. It was as close to my originals as possible so thank you!