BenQ Arrive as the 3rd Player in Colour Accurate Monitors

There has been an interesting development in colour accurate monitors – a field to date dominated by Eizo and NEC. We now have a third serious player. BenQ – until now known best for higher end gaming monitors and peripherals – has produced their first model in a new range of monitors. The PG series displays are aiming to be direct competitors to the two kings of colour accuracy – the NEC PA and Eizo CG series. We’ve had their PG2401PT in house for a few days now and we’re putting it through it’s paces. Right from the first moment it sprang to life (on my desk next to an Eizo CX240 and an NEC PA242W – currently my office is a bit like Air Traffic Control with all these gorgeous screens!)….it was clear that they have produced a high quality screen. 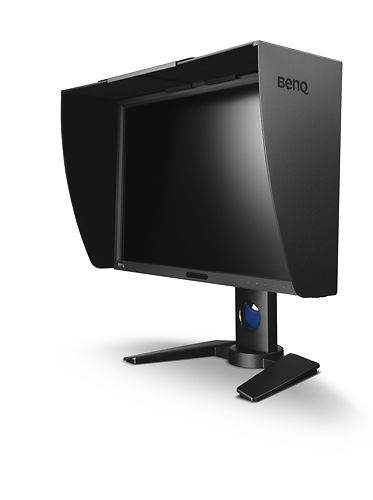 The BenQ PG2410T is a 24″ LED backlit monitor with a 16:10 ratio display, and a ‘Full HD’ resolution of 1920 by 1200. Yes, we’d all love for that to be higher, but none of the colour accurate brands are doing very high resolution displays at reasonable prices yet….my personal guess on that is we’re not likely to see those becoming common till 2015+. It’s noticeably svelte – distinctly thinner that the Eizo and NEC offerings – but remains your basic black bezel-ed desktop monitor – not unattractive, but no beauty queen either. Seems like they have concentrated on the colour performance rather than the ‘DazzleThunder’ of industrial design. But I’ll take high colour accuracy over fancy aluminium casing every day of the week. The stand is very good…on par with NEC’s and I think better than Eizos, with lots of adjustment available and a simple but effective cable management system. The screen has a USB hub (1 in, 2 out, and yay for USB3!), and a built in SD card reader that could be handy. But basically, on your desk, it will be much like the Eizo CX240 or NEC PA242 in practise.

The monitor comes as a package that includes a good quality hood, most common cables, and ‘Palette Master’ – which is BenQ’s direct hardware calibration software (akin to SpectraView 2 or ColourNavigator). BenQ have partnered with the best name in colour, X-Rite, so this is essentially a tweaked version of i1Profiler that talks directly to BenQ’s proprietary hardware. More on this below. There’s also a unit specific factory calibration report just like you get with Eizo and NEC. And the figures on my unit are every bit as impressive as I would expect from the other brands. Probably why this screen has sailed through the various FOGRA/IDEA certification processes. Quite simply, they are not mucking about and have essentially copied the successful formula of the better known brands.

Quality – well, it’s immediately clear that we’re in safe territory with this screen – indeed, out of the box, simply turned on, it was an excellent match for my fully calibrated day to day monitor, the NEC PA271W (an excellent colour accurate monitor with a more traditional compact fluorescent backlight (CFL). Indeed, in a blind test you’d be very hard pushed to tell the two apart. There is a slightly different character to the pixel structures of LED vs. CFL backlit screens, but honestly you have to come in unreasonably close to see this, and it’s of no practical concern in general image use. You do notice it slightly in text, with the LED screens being a bit sharper. Not 100% sure which I prefer, oddly…the LED perhaps makes it more noticeable that these are not yet super high resolution displays. I think I have been spoiled by the screen on my Nexus 7 2013 tablet which, from a text rendering point of view so far exceeds anything else I have seen (including iPhone 5s, and Macbook Retinas, by some margin actually), that text on anything else will never satisfy me again! But, for my image station, I want colour accuracy first, so I am not bothered at all by the standard resolution displays that all of these monitors currently have.

Shadows are deep and rich, but with good detail. Highlights are clean and very uniform – eyeball to pixel there is perhaps slightly more ‘rainbow effect’ to the anti-glare coating on the BenQ than either the Eizo or NEC, but way less than you see on e.g. Dell Ultrasharps. As ever, Eizo’s neutrals on their ColorEdge models are simply the best in the business – very clean, neutral and well separated at both ends of the tonal scale. This is very important overall, not just for black and white photographers but as the neutrals in some ways are the basis of all further reproduction, this generally gives the very highest end Eizos just a slight edge overall to my eye – in terms of the overall sense of confidence they give me. But both NEC and BenQ are now pretty close on the neutrals, and while the gamut stats are all close on paper, the NEC and BenQ both deliver a more visibly saturated image in practise. This probably explains why NECs are the go-to choice for so many landscape photographers around the world (and fine art photographers have a tendency to lean towards Eizo).

Put simply though, the BenQ slots in beside these monitors surprisingly well and would – for almost any working image maker – largely fulfil the same high end image editing role as the PA242W or CX240. While I think both NEC and Eizo still have an overall quality advantage (in all Eizo being the best – those neutrals are just so good! NEC run a close second), the pricing is of course a significant factor. At just $1399 including hood and software, versus about $1535 for the equivalent NEC package and about $2400 for the Eizo, the BenQ substantially undercuts competitors. This comes down to the company that they are – well known as nimble and aggressive players in the IT market – and the fact they are unique in manufacturing the entire unit – including the panel itself – in house. It’s difficult to argue against the value, that’s for sure! To be reasonable, the comparison is not at all fair to Eizo, as the CX240 includes a 5 year warranty (vs. BenQ’s 3 years), with their absolutely best in the business support. The Eizo is clearly still the best of the three from a quality perspective, and the Eizo also has a nifty correction sensor built in that means your time spent on calibration over the lifetime of the monitor is much less (you still need to occasionally use an external calibrator to do a full calibration, but the correction sensor can re-baseline the monitor to the calibration automatically so your hands on time drops significantly).

Eizo have, without doubt, the best name in monitors – great support, excellent re-sale value, and really a faultless overall package. NEC are increasingly well respected (in Australia they are really catching up to their already excellent reputation internationally), and BenQ have…..well, no track record at all yet in this market! But we’ve spoken to them at length and they seem very serious about it all – and they’ve lined up all their ducks in a row quite well. This first monitor, in what will eventually become a full line of monitors we’re sure, is really a great first effort. Their biggest issue will be convincing people they’re serious players, but anyone who under-estimates them need only look at where, say, Samsung was 5 to 10 years ago. Make no mistake, BenQ are coming and they’ve come out of the gates into this market with a very solid offering.

The one problem with the screen right now is the accompanying software. Apart from the absurd name, ‘Palette Master’ is not yet ready for prime time – it’s a bit crashy (if you want to calibrate to non-standard settings, such as a non 6500K whitepoint), and there’s some significant illogicality in how you define the calibration targets. But they’re working on this actively right now (we’re in touch with the engineers) – and we’ve often seen X-Rite software start a bit shaky but become rock solid within a few months. So we don’t have any great concern about this, but it’s something we’re definitely keen to see improve – after all, the whole point of these screens is to be able to adjust them very specifically to your printed output – that’s how fine art is best done, so it’s pretty much essential. We’re expecting news on this soon, and we’ll re-visit this article once we’ve seen some improvement in this area.

There is also no manual supplied with the software – to be honest, this is common with this sort of thing and most people will just use our Image Science guide to get going (we’ll be working on a BenQ Palette Master guide very soon and in the meantime we can answer any questions you might have and/or get help directly from BenQs engineers if necessary!).

Update 17/10 – BenQ have already supplied a workaround for the issues we were having and are actively working on a new version. They responded to our enquiries in just a few hours!

The release of this monitor will keep competitive pressure in the industry fierce and ultimately, whichever you choose, that’s a good thing for the consumer. There’s no question that these manufacturer’s have been making real attempts to meet the market on pricing, and with the strong dollar, right now is a very good time to be in the market for a monitor here in Australia. It’s pretty amazing what $1400 will now get you versus even 5 years ago. LCDs have come a VERY long way in a short time. This BenQ provides an excellent value offering that would suit a lot of photographers very well as their primary editing monitor.

As ever, here at Image Science, we’re completely brand independent – we only care about the quality of the product and how effective it is for us and our customers – and we’re now the only place in the country where you can chat about and come and see all three of the major brands. We’re more than happy to take you through the relative merits of each and find the right colour accurate monitor for your needs!

Hello there Jeremy and Cameron,

I just received my prints and am really really happy with them. Thank you so much for your time and assistance - greatly appreciated. Will be putting through a few more images for trial, and also looking at testing an A2 size. Also as suggested I shall source a local framer to run through various options as well. Once again thank you for helping me get get started on my print journey!