In the Frame
Sarah Allen

Melbourne based artist, author and designer Sarah Allen uses a combination of digital and handmade techniques to create lively nature-inspired illustrations. In 2020, Sarah embarked on her career as an author with the release of her first author-illustrated, award-winning children's book Busy Beaks. Sarah's passion for education and nature has led her to use art as a way to spread awareness about the environment through in-school artist visits, exhibitions and running collaging workshops.


The most common problem people encounter in digital imaging is 'too dark prints'.

The problem is in fact better stated as 'why is your monitor too bright' or 'why does your monitor make you think your images are brighter than they are'?

Modern monitors are almost all made the same way - as LED backed LCD panels.  And LED lights are very powerful things - the LEDs, pumping out light is as easy as anything.  Out of the box, many monitors are set to 100% brightness, and the average figure for a monitor's maximum brightness is currently around 300 cd/m2 (back in CRT days it was more like 100 cd/m2 - so modern monitors out of the box are very often three times as bright as older monitors were!).

Even if you've adjusted the brightness down a bit, a lot of monitors remain in practise set to far too high levels of brightness for print work - and some monitors, even on 0% brightness, simply can't be brought down to levels appropriate for print work.  So the basic problem most people encounter is that their monitor is simply showing them an overly bright version of their image and leading them to incorrectly think their image is more bright than it is - and when you go to print (with a high quality print vendor who prints properly) - you then experience the actual reality of the correct printing of the numbers specified in your digital file, and you then get the dreaded 'too dark prints'.

Long experience shows that an appropriate level of brightness for print work is, for most folks, between 80 and 120 cd/m2.  There's no exact figure we can give you because it depends on the ambient lighting in your room - if you work in a bright room, you'll find the upper end of that scale works best, if you work in a darker room, then the lower end.  (We run at 90 cd/m2 here at Image Science, in our moderately lit office).

So how do you solve this problem?

Well the most important step you can take if your experiencing this issue is to simply turn your monitor's brightness down substantially, until your on screen image reasonably matches the print you've got.  That's the biggest and easiest thing you can do to start solving this issue.  But there's so much more you can do if you want to get a great screen to print match going on - which is really fundamental to high quality printing practise.

To achieve that, you should explore proper monitor calibration, and as you go further down this path and if you want to achieve really very high levels of screen to print matching, you will inevitably find yourself looking for a better monitor, one designed specifically for colour accurate use.

We have a whole host of material on this site to help you improve your results.  See below for some of the most relevant articles to get you started!

This article discusses the various aspects to buying a monitor dedicated to high quality imaging work.

We also have recommendation pages for specific products to help you solve these problems:

If you'd really like to understand digital colour from the ground up, then you should take advantage of our (free!) guide to the Fundamentals Digital Imaging.  It's a comprehensive guide to understanding everything you need to know to achieve really excellent results with digital imaging.

A complete guide to understanding the key principles and practices of:

5 comprehensive chapters designed to help you develop a ground up understanding of the fundamentals, with the goal of achieving highly accurate, beautiful prints. 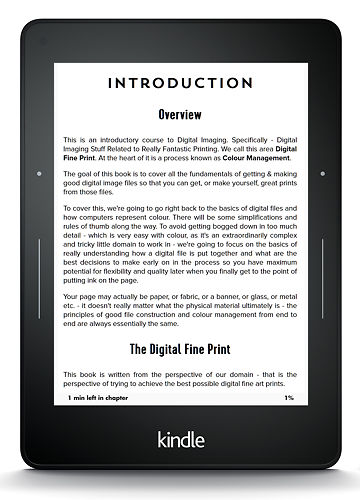 I have to say that your website and your direct communication offer very refreshing levels of detail and clarity compared to the other printing services I have been looking at.