In the Frame
Natania Hollingsworth

Natania Hollingsworth is a Melbourne based artist that creates beautiful black & white illustrations. We have been creating art reproductions from her originals over the past few months and have been amazed at the intricate detail in every one!

Recently Natania has started experimenting with different mediums including watercolour and pencil with some great results! Read more about Natania's work in our featured artist blog.


Ok, before we start any calibration process, it's important to make sure all the basics are in place and that we're fully ready to go.   A little bit of preparation can save a lot of pain!

Here's a check-list of what should be in place before you start any monitor calibration process.

At the end, we also discuss what are the goals of calibration, and give you some specific scenario examples that may be useful.

You need, at least, one power and one video connection to your monitor.

In addition, you may need a data connection as well.

Lack of a data connection is the most commonly missed step with direct hardware calibration monitors, so definitely do check this!!

Note the video connection should be direct from your computer to the monitor.  Do NOT use a hub - most hubs will interfere with calibration.

(If you must use a hub, first get things working with a direct connection, i.e. without a hub, then once all is confirmed working, plug in to your hub afterward.  And if you then later receive errors during calibration or validation, go back to a direct connection).

Your monitor should be connected to your computer using a modern, digital connection - this is the connection that video data travels over.

Read our information about monitor connectors if you need advice on this.

A separate data connection is needed if:

If the calibration software can't make a data connection to your monitor, you will get a message:

- With Eizo ColorNavigator or NEC SprectraView - saying something similar to 'adjustment capable monitor not found'
- With BenQ PaletteMaster Elements either a message 'Make sure your BenQ Monitor is connected with a USB cable', or a rather obscure message about 'Are the FTDI drivers installed?'

If you see any of these messages, it means the vendor software can not communicate with the monitor, so go back and check the notes above and your connections again.

(A good trick, if your monitor has USB ports or an SD card reader, is to plug a known working USB/SD  into one of these, and see if the key comes up on your desktop - if not, you don't have a working data connection).

If you're dealing with multiple monitors (most commonly a laptop with a secondary screen), remember that you must not be in 'Mirror' mode (as then the computer can't tell which monitor to of the two identical displays to manage the colour for).

You must use 'Extended Desktop' mode (or only use the external monitor, turning off the internal laptop display.

How to do do this varies a lot from machine to machine and across operating systems, but there are good tutorials on youtube etc. if you're not familiar with multiple monitor use. 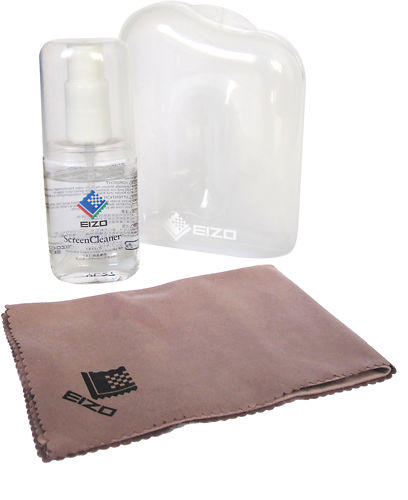 Your monitor's panel must be spotlessly clean.

Seems minor, but we want to make sure our calibrator measures the colour in the most accurate way possible.

Don't use any old cleaning method for this, always use the official good stuff.  And be gentle - your monitor's panel surface is delicate!

Start by uninstalling any old monitor calibration software you may have previously used. This includes and related tray/menubar/startup utilities.  Have a good poke around.  Common problems from not doing this include messages about software not being able to find calibrators - this is because some legacy thing on your system is hogging the connection to the device.

If you're calibrating multiple monitors, you can later re-install the other calibration software if you must, but the cleaner you start the less likely your are to hit odd issues.

We need to make sure your computing environment is correctly set up. There's a few things to check.

Check your video card settings and display preferences to make sure HDR modes are turned off.

Note that, annoyingly, MacOS Catalina and above have HDR turned on by default. This is just stupid.

Choose Apple menu > System Preferences, then click Displays. In Display Settings, make sure that High Dynamic Range is selected. This setting appears only on third-party displays that support HDR. If you don't want to use HDR, deselect this checkbox.

If you have connected your monitor using an HDMI cable (ideally, use USB-C or DisplayPort if you can, instead) - then make sure your video card is outputting full range RGB (0 to 255) and not 'limited range' or 'video' colour (16 to 235) to your monitor.

We don't want your screen's appearance to be modified in any way during the calibration process, so at this time you should also:

Once calibration is complete, you can of course turn your screen saver and power management settings back to where they were (but leave all those other adaptive modes off!).

Keep Up To Date

You should install / update your calibration software to the latest version.

This  is important - with operating system and video card updates, things can and do change, so it's important to keep up to date with your calibration software too.

(Note these applications will actually also install drivers for compatible calibrators, thus you don't generally ever need to install the software that came with your external calibrator if this is the only monitor you are calibrating).

Think About What You're Doing...

We're almost ready to start.  Now, let your monitor warm up, ideally for half an hour, before you start.

This is a good moment to think about what we're actually trying to achieve with calibration.

It's important to be aware of what we're trying to achieve through calibration.

At a basic level, we're trying to make your monitor as accurate as possible for the display of colour. But what IS accurate? As with just about everything, the answer depends on context.

In reality, we're trying to make your monitor the best possible tool for you to produce your work accurately. In practice, this generally means making your monitor be the best predictor of the final output form of your work.

If you're working on still images, and the final destination is print - be it fine art print, or commercial - we want to match the screen's display as closely as possible to this final output, so that we can get as close to 'working directly on the print' as is possible - that is, what we're seeing is very much like the final print, so that any adjustments we make are reflected on the screen just as they will be in the final print.

This generally means that we want to, for example, match the white tone of the monitor fairly closely to the white tone of our paper. And we want to drastically reduce the monitor's high native contrast to something that is a better visual match to the much lower contrast of print (prints don't use power to emit light, they only reflect light, so where modern monitors might have contrast of 1000:1 or more, prints will at most have about 200:1 contrast).

On the other hand, perhaps we're preparing our work for screen output - most like on the internet. In this case, we want our monitor to be a predictor of that output (in as much as this is possible since not everyone has such a lovely monitor on their desk as an Eizo ColorEdge).

In general this means full contrast, relatively high brightness, and picking sensible defaults such as a whitepoint of 6500K and a gamma of 2.2. We might want to set up two calibrations for this - one with the narrower, sRGB gamut of older monitors and phones/tablets etc, and another with a modern wide gamut like P3 (as found e.g. on most current Macs). We can't match every monitor in the world, but if we choose sensible defaults and get things looking good on those, we should be in good shape generally.

If you're producing video output for the web, you'll want to keep things very standard most likely. The bulk of footage in this context is HD - 1920 by 1080 and in the Rec.709 colour space. Reasonably high brightness and contrast, but people don't have their computer screens jacked up to quite the levels of their home TVs.

TVs in real lounge rooms are invariably very bright, very contrasty and very saturated.
And TV gamma is often more like 2.4 in practice. If we're mastering for this environment, then we want to make sure out stuff looks good when viewed on these screens.

Having updated, cleaned, polished, and thoroughly checked your system, you should be good to go.

Please follow on to one of our comprehensive guides to calibration:

How to Calibrate An NEC Monitor With SpectraView 2

How to calibrate a NEC monitor with SpectraView 2 Software.

Calibrating Monitors Using an i1Display/Colorchecker Pro or Plus

I just wanted to thank you for the printer profile – I am SO happy with it!!

I actually can’t believe the difference between that and the one I downloaded from the Canson site for that paper type and my printer. Just amazing.