In the Frame
Drew Echberg

Drew Echberg is a Melbourne based photographer specialising in landscapes - urban and natural. He latest exhibition 'Treescapes' used a unique photographic technique to create semi-abstract images of trees and forests, purely shot in camera with no digital manipulation!


Optical Brighteners are chemicals used in many contexts, for example - they are put into detergents to achieve brighter whites and stronger colours, and can also be found in toothpaste. They are often referred to as OBs, OBAs, or Fluorescent Whitening Agents - FWAs.

OBs convert light through fluorescence, right at the far blue edge of the visible spectrum (i.e. UV light) into visible light, therefore making whites appear cooler and brighter, and colours more saturated. In paper OBs are used for marketing reasons, e.g. to show off the lovely bright whites, and also to allow the manufacturer some tolerance in the paper making process, e.g. if the paper base of a particular batch is a little more yellow than spec, OBs can be used to cheaply bring the paper to a consistent state.

The jury is still out for many people on whether OBs are of real practical significance when considering the longevity of a print. Some people believe OBs will simply fade away over time, leaving the paper no warmer than it would have been anyway, and no warmer than papers originally sold without them. Others believe the chemicals are likely to have an effect on the long term survival of a paper, either causing greater degradation over time, or leaving the paper more yellow than it would have been were the OBs never present. Some people just don't like warmer papers and so are willing to accept OBs no matter what the cost!

The reality is that many prints made by great printers of days past, people like Ansel Adams, were made on papers with OBs in them. Undoubtedly they have a different visual appearance today to prints made on papers that never had OBs in them, but it turns out that many of these prints are still the preferred prints today. The character they have taken on through the OBs fading is actually still appreciated.

However, in terms of colour management, OBs are a definite problem. Firstly, then tend to promote metamerism, making colour casts on black and white prints under different light sources much worse.

They also mean that what you print now, may not be what is on the page in a few years as OBs fade much more quickly than paper coatings without them, therefore all your good work in colour management is negated after just a few years. It may be the fading is very minor, so this may not be a real practical problem, but some very bright white papers have a lot of OBs in them so these should definitely be avoided.

If in doubt, and particularly in the gallery market, it is probably best to avoid papers with OBs in them, or at least papers that have a large amount of OBs in them. Papers like Portfolio Rag, Silver Rag, and most of the Canson papers have only minimal amounts at most, or generally none at all, and are often still really quite a bright white. 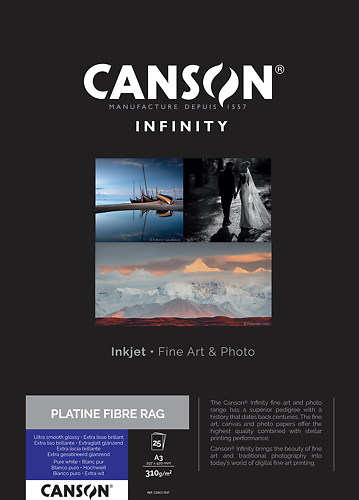 One of our personal all time favourite semi-gloss papers. Highly recommended for both vibrant colour images and contrasty black and whites!
N.B. Please visit the full listing for important info on some variants. 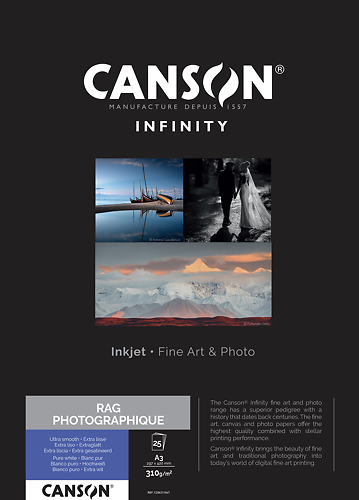 Just a quick note to let you know that the new monitor is now set-up and basic calibration done.

Wow, what a difference a good monitor makes.

I followed all the guides from your website that were suggested and everything went smoothly.

Thanks for all your advice today, I really appreciate you taking the time for our chat.